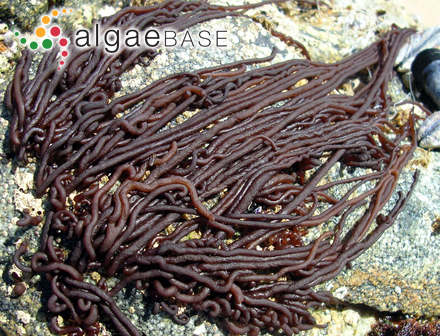 Published in: Withering, W. (1792). A botanical arrangement of British plants; including the uses of each species, in medicine, diet, rural economy, and the arts. With an easy introduction to the study of botany, &c. &c. Illustrated by copper plates. The Second edition. Including a new set of references to figures, partly by the author, and partly by Jonathan Stokes, M.D. Vol. III.. Vol. 3, part 2 pp. [i-xxiv] 1- 503, pls XIII-XIX. Birmingham: Printed by Swinney & Walker; for G.G.J. & J. Robinson, Paternoster-Row, and J. Robson, New Bond-Street, London; J. Balfour, and G. Elliot, Edinburgh.

Synonym(s)
No synonyms are currently included in AlgaeBase.

Nomenclatural notes
According to Athanasiadis (2016: 142): "Originally spelled elminthoides, ... but as the first letter is aspirated it has to be written helminthoides - h standing for the spiritus asper. However, Art. 60.3, clearly says "The liberty of correcting a name is to be used with reserve, especially if the change affects the first syllable and, above all, the first letter of the name." - (1 Feb 2017) - M.D. Guiry

General environment
This is a marine species.

No distributions recorded
No distributional records for this taxon have been recorded by AlgaeBase to date. Generally, recent national lists or extensive regional or state lists have been employed to give a general indication of distribution.

Source of current name
Batters, E.A.L. (1902). A catalogue of the British marine algae being a list of all the species of seaweeds known to occur on the shores of the British Islands, with the localities where they are found. Journal of Botany, British and Foreign 40(Supplement): 1-107.

Accesses: This record has been accessed by users 1586 times since it was created.

Verification of data
Users are responsible for verifying the accuracy of information before use, as noted on the website Content page.

Linking to this page: http://algaebase.org/search/species/detail/?species_id=12833